The Internet is a global system of interconnected computer networks that use their own set of protocols (Internet Protocol Suite or TCP / IP) for the purpose of progressively serving users worldwide.

It is a network of several other networks, with local and global reach and is connected by a wide variety of electronic, wireless and optical network technologies. The internet brings an extensive range of information resources and services.

The origins of the internet go back to research commissioned by the United States government in the 1960s to build a robust and flawless form of communication across computer networks. Although this work, along with projects in the UK and France, has led to the creation of important precursor networks, it has not created the internet. There is no consensus on the exact date on which the modern internet emerged, but it was sometime in the mid-1980s.

Although the internet has been widely used by academia since the 1980s, the commercialization of technology in the 1990s has resulted in its dissemination and incorporation of the international network into virtually every aspect of modern human life. By June 2012, more than 2.4 billion people - more than a third of the world's population - have used Internet services; about 100 times more than in 1995.

Most traditional communications communications such as telephone, music, film and television are being remodeled or redefined over the internet, giving rise to new services. Newspapers, books and other printed publications are adapting to web technology or have been redesigned for blogs and feeds.

The internet has enabled and accelerated the creation of new forms of human interactions through instant messaging, discussion forums and social networks.

Online commerce has grown both for large retail stores and for small artisans and merchants. Business-to-business and financial services on the internet affect supply chains across entire industries. To this aggregation of functionalities by means of a common core (the Internet, in the case), has been used to call technological convergence.

The Internet does not have centralized governance in any technological application or access and use policies; each constituent network defines its own policies. Only the excess definitions of the two major namespaces on the Internet - the Internet Protocol and Domain Name System address space - are managed by a supportive organization, the Internet Corporation for Assigned Names and Numbers (ICANN). Technical support and standardization of core protocols (IPv4 and IPv6) is an activity of the Internet Engineering Task Force (IETF), a non-profit organization of loosely affiliated international participants, and anyone can join in contributing technical expertise .

A Brief History of the Internet in Brazil

Until recently, in Brazil, Internet access was restricted to professors, students, and staff from universities and research institutions. In addition, government and private institutions also gained access due to academic collaborations and non-commercial activities.

Since 1995, the opportunity has arisen for users outside academic institutions to also obtain access to the Internet and for private initiative to provide this service. This means that there would be more and more Brazilian computers, outside the educational institutions, connected to the Internet, and that a wide range of applications would emerge in the short term.

Wired networks: With this type of technology the materials and equipment used are coaxial cables, twisted-pair copper cables, LAN cables, fiber optics and for some time now also the use of electric power cables. For all these technologies it is necessary to use complementary support, that is, ducts, poles, towers and other types of passage structures;

Wireless Networks: In this technology we have access via radio, using various variations of frequencies, we have infrared and laser transmission and more recently data transmission via light;

Hybrid networks: In fact here we can make a mix of technologies, allowing them to mix in the creation of a common network. As in the chart below (captions in brazilian portuguese):
​ 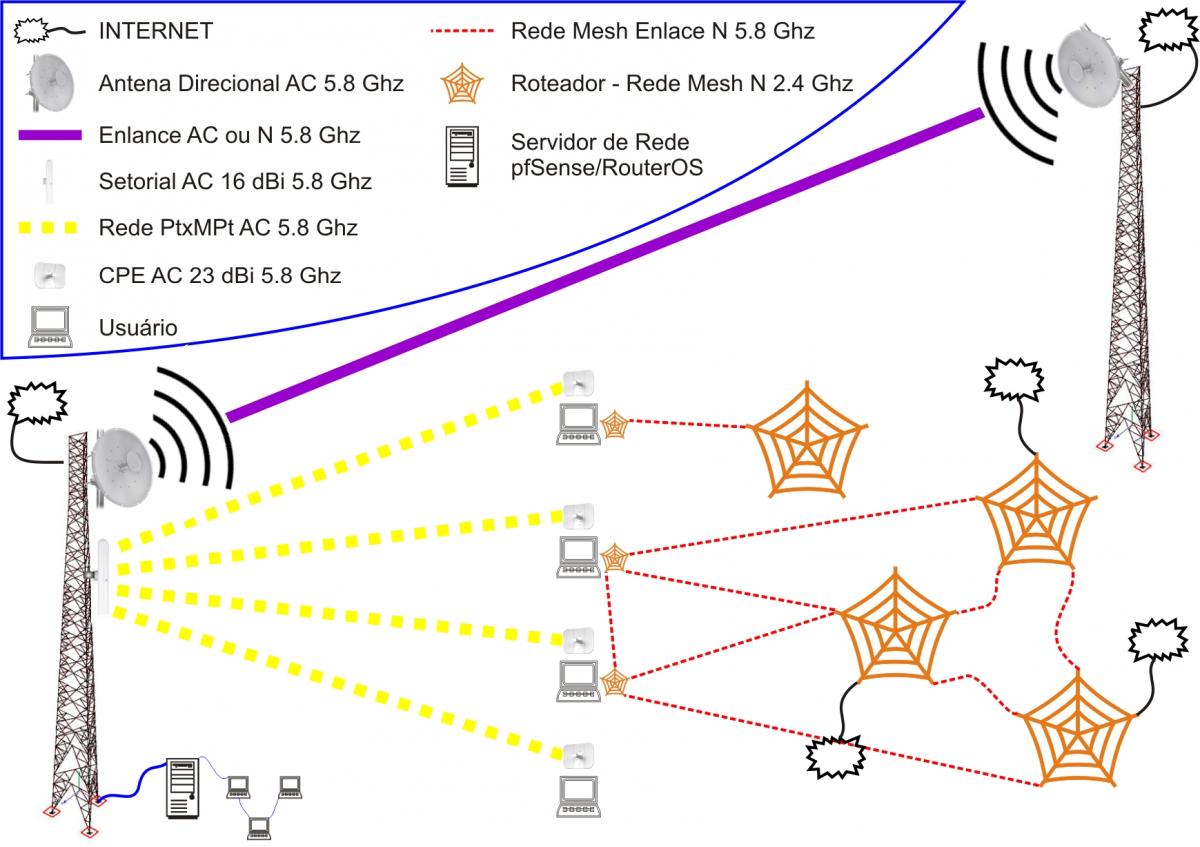